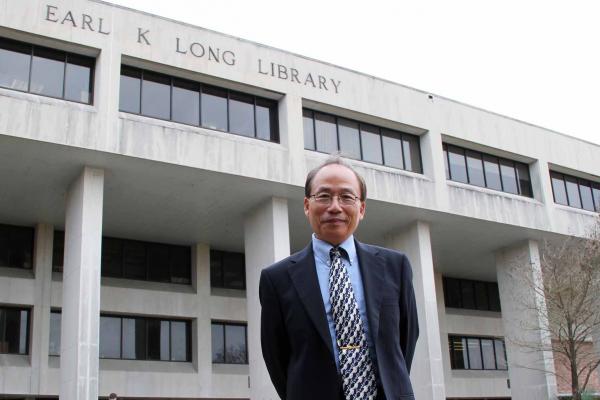 Ray Wang spent hour upon hour in the library when he was in graduate school.

As a Chinese-born international student pursuing his master's and doctoral degrees at Northern Illinois University in the late 1980s and early 1990s, Wang came to view the university library as a home base of sorts.

When other students packed up and headed home for the holidays, Wang would pack up his book bag and find retreat in the stacks and study spaces of the campus bibliotheca.

"I really formed this affinity for libraries," said Wang, newly named University of New Orleans dean of the library and information services. "They helped me to write papers, find information."

Wang comes to UNO from California State Polytechnic University, where he led its library for nine years. While he began his academic studies in the United States with an intention of returning to China to teach English, Wang's fondness for academic libraries and their unique ability to serve students at all levels quickly began to drive his career.

Wang got a master's in library science even before he received his doctorate in education in 1993, and was hired as a documents librarian at Northwestern University in Illinois. He continued on that trajectory a year later, landing a job leading the government document department at Binghamton University in New York before eventually joining Humboldt State University in northern California, where, over the course of a decade, he rose from overseeing government documents to serving as library dean.

University libraries have changed a lot over the decades, but Wang said he's always viewed them as a place where, percentage-wise, students are likely to do most of their learning. "So as a librarian, the most important thing we can ask ourselves is how can we make them better?"

To understand Wang's passion for this field, however, you also have to understand that, in Wang's world, access to information was not always possible.

As a child growing up in Mao Zedong's communist China in the 1960s and 1970s, Wang was 10 when the nation's Cultural Revolution broke out and schools on all levels were closed for academic work for next 10 years. Heglommed on tothe English-language books that his parents had collected in their home.

Wang's father was an educated man who had learned English as a child while attending a school led by American missionaries. He passed the language on to his son - lessons that came naturally to the young Wang - before the red guards, the China's version of Hitler's youth, removed him and his wife from Wang and his two younger brothers, sending the parents into confinement as part of the Cultural Revolution, an effort by Mao's regime to disrupt society of what it viewed as corrupting, "revisionist" capitalist influences.

From age 10 until he was 18 or 19, Wang struggled to reconcile what he knew of his father with the pervasive rhetoric circulating that cast his father and others in his class in poor light. While Wang's mother was reunited with her children after two years, his father did not return until after Mao died in 1976 and universities began reopening. That longstanding separation continues to be a source of pain for Wang, but the gift of English language that his father imparted to him at an early age would become Wang's ticket to higher education and, eventually, to the United States.

Wang remembers scoring 99 out of 100 on the English language test that was required for admittance to Xi'an International Studies University's English program in his hometown.

A year after obtaining his bachelor's degree in English from Xi'an, Wang sat for a highly competitive test to become a translator for the United Nations. He was one of 10 chosen and went on to spend two years in training before working as a UN translator in Geneva, Switzerland. He was subsequently transferred to the UN headquarters in New York.

Being in the room to help facilitate key conversations between the world's leaders, including President Ronald Reagan and Soviet leader Mikhail Gorbachev, was exciting. But Wang quickly detected in himself a desire to further his education and to take a more participatory role in his community than the job of translator would allow.

"I wanted to explore," Wang said.

Some of the professors Wang had studied under in Xi'an were now working at Northern Illinois University and encouraged him to apply to the graduate school. He was accepted on full scholarship and within five years achieved his doctorate.

Over the past 25 years, Wang has been intimately involved in facilitating the kinds of changes that keep institutional libraries relevant. At Cal Poly, he took over a modernizing renovation that included the construction of a $58-million addition. He was instrumental in collaborating with the Kellogg Foundation to build an Arabian horse library at the institution. He led an affordable learning initiative to provide open source textbooks and other free educational resources to students and faculty. And he did all these things amid a financial recession without, he said, reducing services or cutting back on the library collection.

At the University of New Orleans, Wang said he has been moved by the warmth with which he has been received. Even the unhesitating offer by a stranger on a flight to New Orleans resonated with him as something he'd not experienced elsewhere. When the woman seated next to him heard his wife was in a different row, she immediately told him she'd change seats with her. Wang said he hadn't even thought to request the favor.

The Earl K. Long Library, he said, is, without question, the heart of the University of New Orleans campus - and it already behaves as such. Wang said he has long advocated for libraries to collaborate with other university departments to help better serve students. He loved that at the UNO, those collaborations already exist. In addition to its special collections, the library houses the Privateer Enrollment Center, the Veterans Center, the Innovation Lab, the Women's Center and the Center for Teaching Innovation.

"It really helps the University by providing a one-stop service for the students," he said. "They're already doing that here."

Additionally, Wang said that, as an experienced library administrator, he was attracted to working for a university that is working to build resources.

"It's great if you move into a place where everything is set and you have a lot of money," he said. "But it's when things are not quite there because of disasters and funding that your creativity, your experience and your expertise come into play. This is not a place where you can be on autopilot."

In addition to overseeing additional renovations on the library's first floor, Wang said his priorities include helping to build a strong information literacy program that will help students understand how to navigate the many databases available to them while also equipping them to sort fact from fiction, avoiding so-called "fake news" at all costs.

When Wang isn't doing the work of overseeing library staff, budgets and more, he maintains an active intellectual and creative life of his own.

In the meantime, you may catch a glimpse of Wang playing a mean ping-pong game at the UNO Recreation and Fitness Center and giving lessons to others. That's because, in addition to all his other talents, Wang was trained as a child in China to become a professional ping-pong player.

Wang and his wife, Dr. Jean Wang, a cardiac specialist, have two adult children, a daughter and a son. They are expecting to close on a house in Lakeview and will likely become frequent flyers back to California, where their first grandchild, Eleanor, has just turned one month old.