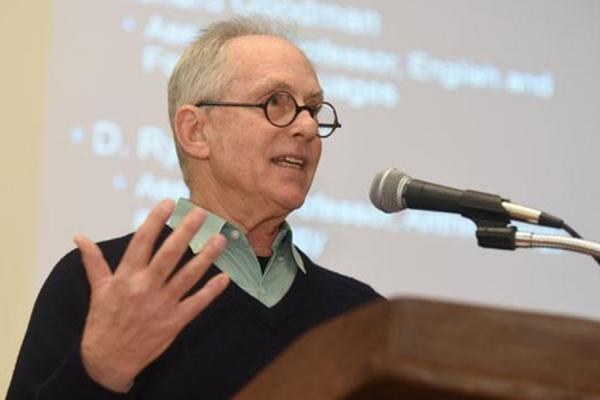 The University of New Orleans has awarded nearly $300,000 in research grants and awards to 21 faculty members and 20 undergraduate students.

During a Jan. 24 awards presentation hosted by the Office of Research and Sponsored Programs that underscored the power of research and the opportunities that exist for UNO scholars at all levels, leaders highlighted the interesting work and accomplishments that are happening on all areas of campus.

"We really are a determined community of scholars and researchers," President John Nicklow said before the winners were named. "We're innovating every day, creating new knowledge and outcomes in service of a better world."

Ryan Gray, assistant professor of anthropology, won the Early Career Research & Scholarship Award. The one-year $7,500 prize is open to assistant professors who have passed their third-year review and who have distinguished themselves in their creative and scholarly activities.

Gray has secured several grants to fund his research and has acquired external funding to update a lab. He consistently publishes and presents at conferences and is under contract for his second book in addition to having several other book-length works in progress. Gray recently worked on a collaborative effort with the National WWII Museum, the Department of Defense and the University of Innsbruck that resulted in the excavation of a crashed plane from World War II and the hunt for the remains of its Tuskegee Airman pilot.

Bischof has led Center Austria since its inception 20 years ago. Since 2013 alone, he has produced seven refereed edited books, four edited volumes that are non-refereed and a dozen book chapters. He has been awarded numerous research grants and helped raise funding for an endowed professorship and an endowed chair. He has earned honors from numerous institutions, including the European Academy of Sciences and Arts, and serves on many boards.

Chakravarty joined UNO in 2012 and has been successful in securing external research funding, receiving more than $1 million dollars as a principal investigator and co-investigator. He has published 16 referred journal articles and 25 conference papers and currently supervises four Ph.D. students and three master's students. At the time of his nomination, his work had been cited 287 times according to Google Scholar.

In addition to these faculty awards, the Office of Research and Sponsored Programs presented the following internal grants:

This new internal grant supports visits to the University of New Orleans by external scholars, researchers or artists, and comes with a $2,500 cap. The winner was John Wiley, director of AMRI, who will use the funds for a one-day symposium entitled "Advanced Materials for a New Age."

Twenty students - 10 underclassmen and 10 upperclassmen - were named winners of the Privateer Undergraduate Research and Scholarly UNO Experience prize, an award that seeks to employ undergraduates in research related to their fields of study under the mentorship of faculty.

The student winners this year receive $1,500 each in the form a student worker position with the faculty mentor. The winners and their faculty mentors are: