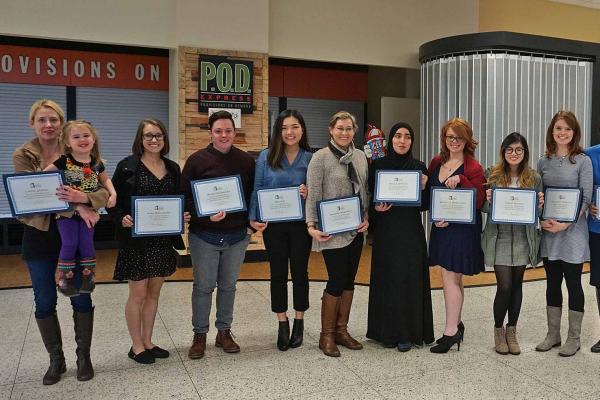 Thirteen University of New Orleans students were honored Friday for their academic accomplishments, hard work, ambition and campus involvement, among other attributes.

The Women's Center of UNO celebrated these female students during its Scholarship & Book Awards Ceremony on Jan. 19. TheCenter aims to honor and support women, regardless of circumstances that may have historically been limiting. Housed in the Earl K. Long Library under the direction of Lisa Verner, the center seeks to support and enrich the academic life and experiences of female students and create equity for women on campus and beyond.

During the ceremony, Verner helped award the following scholarships and book prizes:

The Viriginia Rosanne Amato Memorial Scholarship went to Linnzi Zaorski, Megan Schneider, Soo Kim, Danielle Mangipano, Saada Ibrahim, Destany Parria and Sierra McKee. Named in remembrance of Virginia Roseanne Amato, a student who was killed in an accident while studying abroad in 1996 at age 20, the scholarship seeks to recognize women who have completed at least one year of college and exhibit hard work, ambition and motivation in addition to academic success. It provides in-state tuition, fees and a book stipend for the remaining number of semesters the student has until graduation.

The UNO Scholarship for Women in Computer Science was awarded to Banan Ibrahim and Thanh Nguyen. The award is made possible by alumna Sabrina Farmer, an engineering director at Google, and is given twice a year to a promising female computer science major. In addition to up to $3,000 per semester, the award comes with a year of one-on-one mentoring from Farmer herself.

The Zonta Club of New Orleans Workship was given to Barbara Roberson. The award provides partial in-state tuition to an undergraduate female student who exhibits academic dedication in the face of hardship. It is given in exchange for her completing an internship in the Women's Center. The Zonta Club seeks to improve the quality of women's lives through better health and quality education.

The Jacquelene (Jackie) Seal Book Award was made to Adel Broussard and Elizabeth O'Malley. The $250 book award is offered by the UNO Student Support Services program in memory of Jackie Seal, a student who became a fatal victim of domestic violence days before her scheduled May 2000 graduation. Recipients are recognized for their strong commitment to succeed academically in the face of hardships.

The $250 Shades of Black Book Award was given to Jesstillia Harris, who was not able to attend the ceremony. The award is made by the 12-member Shades of Black Book Club to a woman of African descent in celebration of the power of literacy and academic accomplishments.