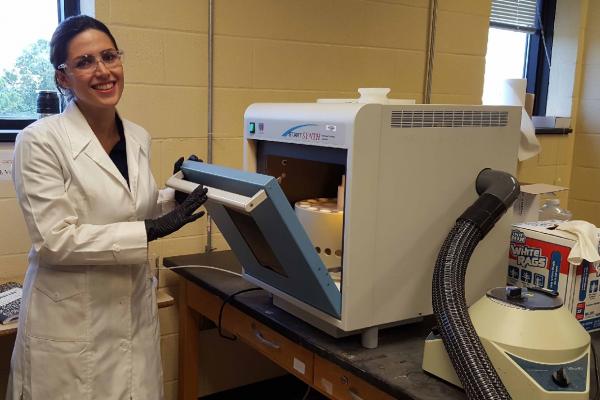 As a graduate student at UNO, Sara Akbarian-Tefaghi demonstrated that a microwave oven could be used to significantly reduce the time required to prepare layered nanomaterials for use. She received a Ph.D. in chemistry from UNO in May.

The microwave oven revolutionized the way we prepare food in America. Microwaves turned the popcorn industry on its head and permanently changed the quality of life attainable from a dorm room. Now, researchers at the University of New Orleans have shown that microwaves can be used to speed up more than dinner. They have successfully used a microwave to accelerate the preparation of layered nanomaterials, reducing the time required from 2-3 days to 1-2 hours.

At the University of New Orleans, John Wiley is the director of the Advanced Materials Research Institute. Wiley supervises a research group currently at work on a project funded by the National Science Foundation to explore the behavior of nanosheets, which are 2-dimensional layered materials. The thickness of a nanosheet is comparable to one ten-thousandth of a single hair lengthwise. In recent decades, nanomaterials have helped make many electronic devices smaller, lighter, cheaper and faster.

Wiley’s team has been working with a particular type of material known as a perovskite. The arrangement of atoms in a perovskite can imbue it with important properties that can lead to applications in clean renewable fuel sources, transportation, communications and health care. To date, standard techniques for preparing perovskite nanosheets for use took 2-3 days. The preparation involves an “exfoliation” process in which a perovskite crystal is separated into individual nanosheets. This is akin to separating individual playing cards from the rest of the deck.

“The nanosheets are important for a variety of applications, and the ability to readily change the surface organic groups makes it easier for such materials to be integrated into various composites,” said Wiley.

A member of Wiley’s team, Sara Akbarian-Tefaghi, knew that the microwave in the chemistry lab had been used successfully to speed processes for achieving other reactions and decided to test it in her work on the nanosheet project to see if it could accelerate the exfoliation process.

“When I started this research back in 2013, we did not have high hopes in exploiting microwaves in the treatment processes of perovskites, but it worked perfectly—it was exceptionally fast with comparable quality,” said Akbarian-Tefaghi, who received her Ph.D. in chemistry from UNO in May.

The microwave used in this process is not a typical model available from a big box store. It uses the same frequency as the home version but offers more concise control over internal temperatures. It’s slightly larger than a typical kitchen model and includes a carousel. Wiley estimates that the microwave’s capacity would allow preparation of well over a trillion nanosheets per batch.

Using the microwave technology, Akbarian-Tefaghi reduced the preparation time from a few days to a few hours. The finding was significant enough that Wiley’s team published a paper about the success of the microwave technique in the academic journal ChemNanoMat. The journal publication garnered attention from ChemViews magazine, published by ChemPubSoc Europe, an organization of 16 continental European chemical societies.

“These methods should be applicable to a large number of layered oxides and organic surface moieties. They could allow the rapid production of various 2D hybrids with potentially novel electronic, magnetic, optical and mechanical properties,” according to ChemViews.