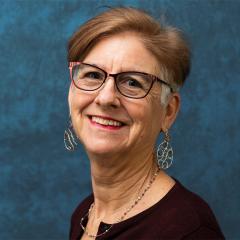 As an interdisciplinary scholar who has become a prominent advocate of cognitive and evolutionary approaches to literature over the past twenty-five years, Nancy Easterlin has addressed many of the key concerns raised by scholarship between the humanities and sciences. These include the foundation of knowledge, the genesis of meaning, and the determination of aesthetic value. In her recent book, A Biocultural Approach to Literary Theory and Interpretation (Johns Hopkins, Spring 2012), Easterlin demonstrates the utility of broad-based evolutionary and cognitive knowledge for a range of literary specializations, including new historicism, ecocriticism, cognitive criticism, and evolutionary criticism. Easterlin received a Guggenheim Fellowship for the 2008 calendar year in support of this book project. Her current ecocritical work explores the concept of place in literature as well as the value of the humanities in higher education.