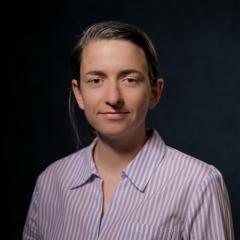 Liz Hogan was born in Hammond, LA, a town that New Orleanians frequently refer to as "the country." Four of her five immediate family members are attorneys; Liz, however, is not. After earning a BA in history from Agnes Scott College, Liz traveled the “bigger” country, worked at a Buddhist retreat center in Colorado, formed a rock band, and finally earned an MFA in poetry from the University of New Orleans. She currently teaches First-Year Composition at UNO, and her research interests include composition pedagogy, violence and gender in the works of Emily Dickinson, and the sub-genre branching of poetry due to politics, popular culture, and academia.

A student of the world, Liz enjoys reading Buddhist philosophy, nature writing, texts examining racism and white privilege in the United States, poetry (of course), and sports psychology. She coached soccer in a former life, and now attempts yoga to no avail. When she's not exercising or grading papers, Liz can occasionally be spotted taking landscape pics at City Park or drinking two shots of iced espresso at coffee shops around town.