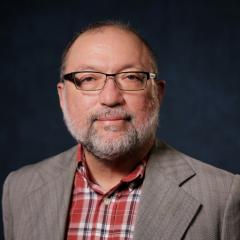 Mr. Rayes is a New Orleans native and a graduate of The University of New Orleans.  His areas of specialization are Composition, Film as Literature, Technical Writing, Science Fiction Literature, American Literature, Latino Literature, and the Graphic Novel.

As a teacher of Technical Writing, Mr. Rayes draws on his over 20 years of experience in the local Consulting Engineering Industry to provide a practical framework for writing in the workplace.  As a teacher of film as literary texts, Mr. Rayes has written and presented on the Director Julian Schnabel and the functions of music and scoring in film.  Mr. Rayes has also worked in the local radio industry and written for local publications such as Tribe magazine and national publications such as The Village Voice.