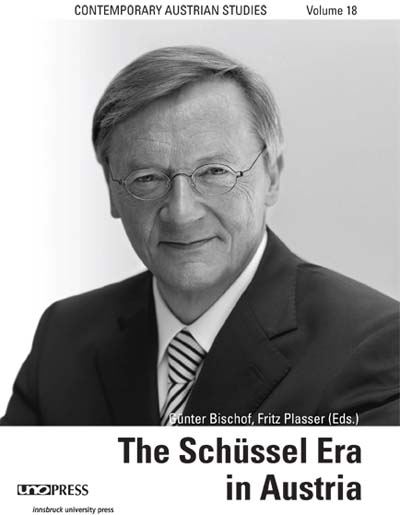 The Schüssel Era in Austria

The first volume published as a joint venture by University of New Orleans Press and Innsbruck University Press, Volume 18 in Contemporary Austrian Studies focuses on the lasting impact of Wolfgang Schüssel, who was a dominant political figure in Austrian politics for 20 years. This volume gives readers an understanding of what makes Schüssel’s imprint on Austrian politics so undeniably significant. Holding several government positions during his career, Schüssel is best known for his two terms as Chancellor of Austria (2000-2007). While he was responsible for large-scale reforms such as trimming the hidebound pension system and giving more autonomy to higher education, in the process he undermined Austria’s consensual social partnership. His record of supporting the European Union agenda is ambivalent, and Austrian public opinion in support of the EU declined precipitously during his time in office. In spite of his superb tactical and negotiating skills, he failed to achieve broad popular acceptance for his ambitious reforms. Volume 18 features essays by Peter Gerlich, Fritz Plasser/Peter Ulram, Heinrich Neisser, Reinhard Heinisch, Heinrich Niesser, Johannes Ditz, Josef Leidenfrost, Anton Pelinka et al., as well as a forum on the “disturbing creativity” of Austrian artists, book reviews and the review of Austrian politics.

"Contemporary Austrian Studies marks almost two decades of important scholarship with a study of the turbulent era in which Austro-Germans had to rebuild their identity as a Republic in the face of daunting political divisions and economic adversity." —Charles S. Maier, Leverett Saltonstall Professor of History, Harvard University

Fritz Plasser is professor of political science and Dean of the Faculty of Political Science and Sociology, University of Innsbruck, Austria.