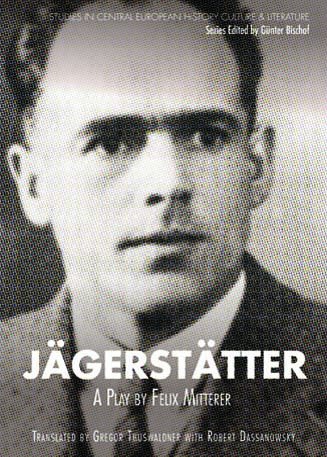 Felix Mitterer’s gripping drama Jägerstätter is based on the life and death of the martyr Franz Jägerstätter (1907-1943), an Austrian farmer who refused to fight for Hitler because of his Catholic faith. Mitterer depicts Franz, who was beatified by Pope Benedict XVI in 2007, as a courageous but struggling and insecure human being—and not at all as a saint.

"...The appearance of this play in English makes a strong contribution in several fields, especially literature and history. This publication makes the fascinating, improbable story of Blessed Franz Jägerstätter more widely accessible, and that can only be seen as a strong plus." —Vincent Kling, La Salle University, the Journal of Austrian Studies

"The signal achievement of Thuswaldner’s skillful translation is to bring to potential American audiences a thoughtfully edited and stageable version of an important and compelling story of individual courage and the strength of conviction against terrifying odds". —Ralf Remshardt (University of Florida), Delos: A Journal of Translation and World Literature, Vol 31, 2016

"The prefatory materials in this edition are of great value to anyone, especially to the non-specialist. (The back matter includes the same photographs from the original German edition.) The footnotes and bibliography gather into one place most of the salient sources from the standpoint of the historian and thus constitute a good beginning point for additional research. Thuswaldner likewise brings together the major literary and filmic treatments of the subject in connection with detailing how Mitterer came to write his play on a commission by actor Gregor Bloéb (brother of actor Tobias Moretti, incidentally) in 2011. Besides Mitterer’s play, by now famous, Thuswaldner mentions a one-woman show called Franziska Jägerstätter erzählt and another play and a novel about the man. The introduction also contains a well-argued appreciation of Mitterer (xxv-xxvi), underestimated because so much of his work is popular in tone and deceptively provincial and folkloristic—but with universal value and insight apparent to those who pay attention." — Vincent Kling (La Salle University) Austrian Studies Journal 49.3 (2016).

“...the Jägerstätter story is that of the Church’s own mission of protest and prophecy in the gravest spiritual crisis man has ever known.” — Thomas Merton

Felix Mitterer (*1948) is one of Austria’s most celebrated contemporary authors. He has written numerous award-winning plays, radio plays, and TV scripts. The ORF, Austria’s Public Broadcasting Cooperation, began producing his dramatized texts in 1970. Since the publication of his first play, Kein Platz für Idioten (No Place for Idiots) in 1977, Mitterer has been regarded as one of the leading Austrian playwrights. His many literary awards include the Ernst Toller Prize, the Adolf Grimme Prize, and most recently the .d.n von Horvath Prize. His dramatic works and film scripts are particularly well known for their critique of Austrian politics and society. His Piefke Saga (1988/1989) was a highly controversial and enormously successful television mini-series that critically and satirically illuminated the complex relationship between Austrians and Germans. Mitterer has also written twelve scripts for the well-known Tatort crime show which is co-produced by Austrian, German, and Swiss public television stations. Among his most successful plays for theater are Die Kinder des Teufels (Children of the Devil), In der Löwengrube (In the Lion’s Den), and Sibirien (Siberia). After living in Ireland for fifteen years, Mitterer returned to Austria in 2011.

Gregor Thuswaldner is Professor of German and Linguistics at Gordon College in Wenham, Massachusetts and Co-Founder and Academic Director of The Salzburg Institute of Religion, Culture and the Arts, an independent non-profit organization. A native of Salzburg, Austria, he studied German and English at the University of Salzburg, Bowling Green State University, the University of Vienna (Mag. phil.) and received his Ph.D. in Germanic Languages from the University of North Carolina at Chapel Hill. He has published articles and book chapters on Christoph Martin Wieland, Thomas Bernhard, Michael Haneke, Michael Scharang, Stanley Hauerwas, literary theory, linguistics, German and Austrian literature, culture, politics, and religion. His articles and book reviews have also appeared in German, Austrian, and American newspapers. He is a co-editor of the essay collections Der untote Gott: Religion und Ästhetik in deutscher und österreichischer Literatur des 20. Jahrhunderts (2007) and Making Sacrifices: Visions of Sacrifice in American and European Cultures (2015). In 2008, he edited the essay collection Derrida und danach? Literaturtheoretische Diskurse der Gegenwart. Dr. Thuswaldner’s monograph entitled “Morbus Austriacus”—Thomas Bernhard’s Österreichkritik appeared in 2011. He is currently working on a monograph on Stefan Zweig.

Robert Dassanowsky is Professor of German and Film, and director of the Film Studies Program at the University of Colorado, Colorado Springs, and works as an independent film producer. His research centers on Central European and American cinema and on twentieth century Austrian and German literature and culture, and he has written for stage and television. A past president of the Austrian Studies Association, Dr. Dassanowsky currently serves on the advisory board of the Salzburg Institute of Religion, Culture and the Arts, and on the editorial boards of the Journal of Austrian Studies, Colloquia Germanica, and Ariadne Press. He is a member of the Austrian and the European Film Academies, PEN USA and PEN Austria, and is a Fellow of the Royal Historical Society (UK). He was named the 2004 Carnegie Foundation/CASE U.S. Professor of the Year for Colorado, received the CU Thomas Jefferson Award in 2015, and presented the 2015 Annual Botstiber Institute for Austrian-American Studies Lecture. His books include Austrian Cinema: A History (2005), New Austrian Cinema, co-ed. with Oliver C. Speck (2011), The Nameable and the Unnameable: Hugo von Hofmannsthal’s Der Schwierige Revisited, co-ed. (2011), Quentin Tarantino’s Inglourious Basterds: A Manipulation of Metafilm, ed. (2012), World Film Locations: Vienna, ed. (2012), and the forthcoming Screening Transcendence: Film under Austrofascism and the Hollywood Hope 1933-38.

Günter Bischof is a native of Austria and graduate of the Universities of Innsbruck, New Orleans, and Harvard (PhD ‘89). He is a University Research Professor of History, the Marshall Plan Professor and Director of CenterAustria: The Austrian Marshall Plan Center for European Studies at the University of New Orleans; he served as a visiting professor at the Universities of Munich, Innsbruck, Salzburg, Vienna, Louisiana State University-Baton Rouge, Liberal Arts University in Moscow, and the Economics Universities of Vienna and Prague, as well as Hebrew University in Jerusalem; he is the author and editor of many books. With UNO Press he is publishing the series Contemporary Austrian Studies (24 vols) and Studies in Central European History, Culture & Literature (2 vols).