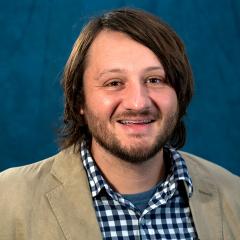 James Roe teaches film post-production techniques, including visual effects, post-production sound, and editing. He received his Master of Fine Arts from the University of New Orleans in 2013.

Prior to working at UNO, James had a successful career as an editor and visual effects artist in film and television, with credits on national and regional commercials, documentaries, television shows, and feature films. In addition to his work in the post-production field, James has also written and directed multiple short films and documentaries, many of which have received recognition at the national level. His graduate thesis film was a finalist in the Student Academy Awards in Los Angeles, and won “Best Louisiana Short” in the New Orleans Film Festival.