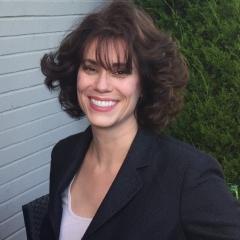 Carolyn Hembree was born in the twin city of Bristol, Tennessee. Following her graduation from Birmingham-Southern College, Carolyn moved to New York by way of Greenville, South Carolina. During these lean years, she found employment as a cashier, house cleaner, cosmetics consultant, telecommunicator, actor, receptionist, paralegal, and freelance writer. She least enjoyed her brief post in a hotel basement where she alphabetized business cards next to a ten-pound bag of defrosting chicken parts. Like so many stars, Carolyn burned too brightly: her film debut was, alas, her swan song. For the NYU student flick Altered States, the aspiring actor, an albino boa constrictor draping her shoulders, spun in the February rain atop a roof in Alphabet City. On a train ride from Emily Dickinson’s Amherst, she decided to pursue the less perilous vocation of poetry writing. Carolyn received her MFA in Creative Writing from the University of Arizona.

Carolyn’s first poetry collection, Skinny, was published by Kore Press in 2012 and her chapbook by Nous-zōt Press in 2015. In 2016, Trio House Books published her second collection, Rigging a Chevy into a Time Machine and Other Ways to Escape a Plague, selected by Neil Shepard for the 2015 Trio Award and by Stephanie Strickland for the 2015 Rochelle Ratner Memorial Award. Her poems have appeared or are forthcoming in Beloit Poetry Journal, Colorado Review, The Southern Review, West Branch, Poetry Daily, and elsewhere. She received a 2016-2017 ATLAS grant from the Louisiana Board of Regents and has also received grants and fellowships from PEN, the Louisiana Division of the Arts, and the Southern Arts Federation. A recipient of the University’s 2017 Alumni Excellence in Teaching Award, Carolyn has taught graduate, undergraduate, online, and brick-and-mortar classes at UNO for more than twenty years. She also serves as Poetry Editor of Bayou Magazine.

Rigging a Chevy Into a Time Machine and Other Ways to Escape a Plague (Trio House Press, 2016), 2015 Trio Award, 2015 Rochelle Ratner Memorial Award

The Craft of Poetry