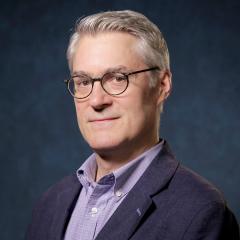 Jazz pianist, composer and arranger, Victor Atkins, is a professor of music at the UNO School of the Arts where he serves as graduate coordinator for the Department of Music and instructor of jazz theory, composition, arranging, class piano, ensemble, and applied keyboard. He is a graduate of Berklee College of Music where he studied with Donald Brown, James Williams, and Mulgrew Miller and earned a B.M. before attending Manhattan School of Music, where he earned an M.M and studied with Kenny Barron and David Berger.

Atkins won a Grammy with the New Orleans Jazz Orchestra (NOJO) in 2009 for Book One (World Village, 2009). For the past 15 years, he has been the pianist and principal staff arranger for the orchestra. His arrangements can be heard on Dee Dee Bridgewater’s "Dee Dee’s Feathers" (Sony/Okeh 2014) which features NOJO and on two NOJO CD’s: "The Songs of Allen Toussaint" (Storyville Records, 2018), featuring Dee Dee Bridgewater and Dr. John, and the soon to be released "Petit Fleur," featuring Cyrille Aimée. The band has performed notable concert halls and festivals throughout the Americas, Europe, Africa, and Australia. In 2012, they performed at Carnegie Hall with Ms. Bridgewater, Aaron Neville, and Branford Marsalis. In 2013, NOJO was the house band for “Great Jazz,” a Kultura-TV jazz competition television series that ran for seven weeks in Russia. Victor oversaw the production of 72 big band scores by a staff of arrangers. He wrote 20 charts for the show, one of which was performed by the Bolshoi Ballet on opening night.

Victor has garnered many commissions from performing arts organizations such as the New Orleans Jazz Institute and the Louisiana Philharmonic Orchestra. His most recent commission was for the Newcomb Art Museum of Tulane University’s exhibition, "Per(Sister): Incarcerated Women of Louisiana," which ran January 19, 2019 – January 19, 2020, before being moved to the Ford Foundation Gallery on February 21, 2020, where it will remain until May 9, 2020.

"An unconventional pianist… who demonstrates an ability to build from simple single-note lines to a powerful rhythmic chord-driven climax.” -Leonard Feather, L.A. Times

"Victor Atkins has an arranger's sense of how music should move." -Zoe Anglesey, DownBeat Magazine

Students must understand the importance of learning. They must know how and what to learn. They have to develop ways to teach themselves and to be clear that no course or instructor can guarantee to teach them everything they need or want to know. As an educator, I can make sure students have a solid foundation in music fundamentals through the study of theory, harmony, composition, arranging, and performance. As an artist, I want students to find out who they are and how to express themselves through the medium of music. Jazz Studies students should have the spirit of adventure to explore music through self-discovery, creativity, and diversity. My guiding principles are to be committed to the mission of the Department, aspire to its directive, maintain open and flexible teaching methods, and to be dedicated to the students. We serve a very diverse student body. While the mission remains the same, the students continue to change.

It is important for me to get to know every student, their way of learning and assimilating course material, and to adjust to their needs. It is critical to understand why the student is in school, what they plan to do as artists and professionals, and how to teach them. This is most effective with applied lessons, directed independent studies, and ensemble rehearsals. It is possible to achieve similar results with students in lecture classes, but it is not always practical because of the size and nature of the classes. In such cases, I engage those students who struggle with the material to make sure they understand it and I challenge those who are either more knowledgable or who are faster learners. It is a delicate balance but one that I strive to achieve.

Jazz Studies students are responsible for new directions in jazz music through the observation and mythologization of our society and culture. We rely on them to forward the tradition with reverence for the past and fire for the future. In doing so, they must find their inner voice, chase their muse, enrich mankind with their artistry, and, most importantly, live an affordable life. Whether they commit to a specific genre or style or dedicate themselves to being radical nonconformist innovators, they must be employable, reliable, and contributing members of society. With the tools I provide in the classroom and in the hallways, a proud alumni will find their path in life, be gainfully employed and will represent the University of New Orleans in concert halls, jazz clubs, classrooms, festivals, juke joints, recording studious, textbooks, television, and film.

My primary interests are in jazz music performance, improvisation, composition, arranging, and instruction. Research into these areas is personal and practical. As a creative, it is a lifestyle of daily endeavors such as routine instrumental practice to develop repertoire, incorporate various styles and genres, and expand technique for performance; the analysis of significant performances by great soloists and works by major composers and arrangers; and the necessary preparation for professional engagements and curricular development. These are the rituals that create scholarship.

Technology and distance learning are becoming central to my teaching as I help to develop the music education division of a notation app called Manoké. It was developed at Topxight Lab, LLC and is funded by Valmiki Capital. The app has over 100,000 users. My educational content is currently being used at UNO, Ursuline Academy, and Musee Musical - School of Music (Bangalore, India), where I taught a summer class from home using the app in conjunction with video conferencing. It was very successful and I am most interested in research to learn more about the effectiveness of music education through technology and distance learning.

With the funds made available to me through the Danny Barker Professorship, numerous purchases have been made to acquire books and scores to research significant and favorite composers and arrangers, as well as writing methods and techniques. For class, contracts, inspiration, and pleasure, I love to analyze music and will continue to develop my musicianship through the research of other artists and authors. It makes me a better musician, educator, professional, and listener.

As for my creative interests, I would like to archive the music of my colleagues and students. Producing an annual recording session or concert/fund raiser with jazz ensembles of various sizes up to a big band comprised of current students, alumni, and staff performing the music of past and present faculty and students would enhance our mission and recruitment strategies. The scores and recordings could be available at the library and/or through social media or a YouTube page. This would honor the work of educators like Ellis Marsalis, Edward Petersen, and Harold Battiste, who helped create and build the Jazz Studies division.