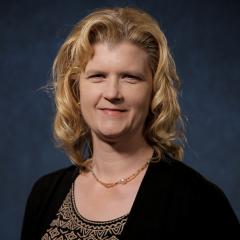 Megan Dearie, mezzo soprano, holds a Bachelor of Music Education from Loyola University in New Orleans and a Master of Music in Vocal Performance from LSU, and is a busy professional singer and teacher in the New Orleans area. She is a voice instructor at the University of New Orleans, and cantor at Mater Dolorosa Catholic Church, at St. Louis Cathedral and for the Archdiocese of New Orleans. She maintains an active independent teaching studio, giving private voice and piano lessons and is frequently heard as a wedding soloist.

In December of 2005 Megan released her first CD recording of songs from the world of musical theater and jazz. In 2006, she participated in the Cabaret School at Yale University. She has soloed in a variety of musical performances and theatrical productions, including the Magnificat by J. S. Bach, Nettie Fowler in Carousel, Mother Abbess in The Sound of Music, the Aunt in Madame Butterfly and numerous Messiah performances. Upcoming plans include the release of a CD, Sacred Songs, and a cabaret show of the music of Jane Froman.

Megan has also taught at Notre Dame Seminary College, Delgado Community College, and Tulane University. She is a member of Music Teachers National Association, the Louisiana Federation of Music Clubs and the National Pastoral Musicians Association.