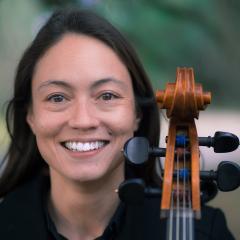 Hailing from Flint, Michigan, the Lott's cellist  joined the Louisiana Philharmonic Orchestra in 2013, previously holding a position in the Lansing Symphony Orchestra.

Rachel has participated in a variety of festivals and projects including the Sinfónica de Minería in Mexico City, the Castleton Festival Orchestra, the YouTube Symphony with Michael Tilson Thomas, the Civic Orchestra of Chicago, the AIMS Festival Orchestra in Graz, Austria, and the National Repertory Orchestra.

Since moving to New Orleans, Rachel has had the opportunity to appear as a cellist on the television shows NCIS: New Orleans and On Becoming a God in Central Florida.

Rachel received her bachelor’s degree in cello performance at the University of Michigan where she studied with Erling Blöndal Bengtsson. A recipient of the Gregor Piatigorsky Scholarship, Rachel earned a master’s degree and graduate performance diploma at the Peabody Conservatory under the tutelage of Alan Stepansky, former Associate Principal Cello of the New York Philharmonic.