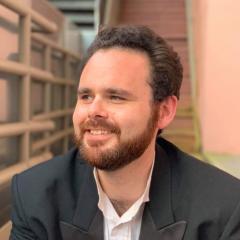 A native of Cape Cod, MA, Benjamin serves as first violinist of the Lott String Quartet.  He received his Bachelors degree from the New England Conservatory where he studied with Donald Weilerstein and James Buswell.

He continued his graduate studies at the San Francisco Conservatory where he worked with Ian Swensen. Benjamin was also pleased to study with Itzhak Perlman for two summers at the Perlman Music Program and has attended the Schleswig-Holstein Music Orchestra, American-Bach Soloists and the Yellow Barn Music Festival.

Benjamin joined the Louisiana Philharmonic Orchestra in 2013 and served as their concertmaster for two seasons. Prior to that, Benjamin was Associate Concertmaster of the Boise Philharmonic.  He has also appeared as guest Concertmaster with the Auckland Philharmonia in New Zealand and the West Australian Symphony in Perth, Australia.

Benjamin is pleased to join the violin faculty at the University of New Orleans.