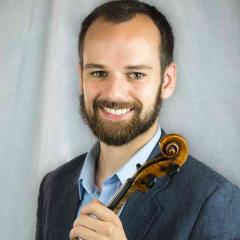 Kurt Munstedt joined the Louisiana Philharmonic Orchestra in September, 2017. Originally from Needham, Massachusetts, he started playing the violin at age five. He holds Bachelor of Music degrees in violin and audio recording from the Cleveland Institute of Music, and a Masters degree from Carnegie Mellon. His principal teachers include Joel Smirnoff and Andres Cardenes. Before moving to New Orleans, Kurt was a fellow at The Orchestra Now, a training orchestra located at Bard College, NY. He has performed concerti with the CMU Baroque Ensemble, Parkway Chamber Orchestra and the Reading Symphony, and appeared as concertmaster of the CIM, Orchestra Now, and Round Top orchestras.

A dedicated chamber musician, Kurt studied with members of the Juilliard, Cleveland, Tokyo, Takács, and Brentano Quartets. Kurt was a member of the CMU Honors String Quartet, performing in Doha, Qatar in 2015. Kurt also performs on the Baroque violin, and has played with the Tafelmusik Institute (Toronto) and The Sebastians (NYC). As an advocate of non-traditional performance spaces, he has brought classical music to museums, prisons, bars, and hospitals. He has enjoyed participating in the Schleswig Holstein Festival Orchestra, National Repertory Orchestra, Toronto Summer Music Festival, and the St. Lawrence Quartet Seminar.

Kurt is pleased to be joining the faculty of the University of New Orleans as a member of the Lott String Quartet.