Class of 2025 Welcomed at New Student Convocation: ‘We are now part of a shared journey,’ President Nicklow

The Class of 2025 was welcomed to the University of New Orleans during a new student convocation held Friday, Aug. 13, 2021 at Lakefront Arena.

Following last fall’s COVID-forced hiatus, the University of New Orleans returned to tradition on Friday by welcoming the Class of 2025 with a new student convocation held at the Lakefront Arena.

The annual convocation, which included faculty marching in full academic regalia while the sound of “Pomp and Circumstance” poured through the arena, commemorates the start of the academic journey for new students with an opening ceremony.

Thomas Tran and Sophia Cao, both of Marrero, were among the crowd of first-year students waiting to enter the arena.

Both said they were anxiously awaiting their college journey.

“I’m kind of nervous because it’s college,” Tran said with a laugh.

Tran and Cao, who met in elementary school, plan to major in nursing.

Nicklow praised the students for their academic accomplishments thus far, saying that they have taken “a leap toward enrichment,” by enrolling at the University of New Orleans. However, he told them much work lies ahead.

“I expect there to be sacrifice and even some struggle in your future. Of course there will be. We are in the middle of a global pandemic, which brings its own obstacles and worries,” Nicklow said. “In addition to those your intellect will be challenged. Make no mistake, our expectations of you are high.

“But that is not something to fear. Embrace it and focus on your ability to persist; it is all part of higher learning, and you would not be here today if we weren’t confident in your ability to succeed.”

Nicklow shared that the “we” he referenced were the administrators seated on the platform behind him, as well as the faculty and staff in the audience and around campus.

“Our singular goal is to support you, whenever and however you need it, in meeting those expectations,” Nicklow said. “It is particularly important that we do that during COVID and keep you on track in spite of any adversity.  We can do that through a joint spirit of compassion and flexibility.

“We are now part of a shared journey.”

Golz encouraged students to step outside their comfort zones and get involved in campus activities, don’t be afraid to ask for help and to make it a point to be friendly.

“It takes courage to put yourself out there like that; you might be uncomfortable for a few minutes but the friendships you create can last a lifetime,” Golz said.

Meanwhile, Lemelle reminded the newly minted Privateers that just three years ago, she was the new student.

“I was excited, I was nervous, I was scared,” Lemelle said. “I want y’all to know that is normal. If you look around there are so many of you feeling the same thing, and you have each other.

“College is going to be a challenge. It isn’t supposed to be easy … I just want you to remember that you can do it.”

Lemelle concluded her remarks with a press of a button that punctuated the welcome celebration with an explosion of blue streamers that floated from the ceiling.

Monday marks the first day of classes for the fall session and first-year student Taylor Carrere of New Orleans said she is looking forward to it.

“I’m excited about meeting new people and starting class,” said Carrere, who plans to major in civil engineering.  “A lot of my family members have gone here and it’s close to home.” 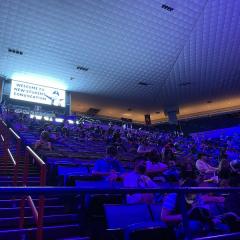 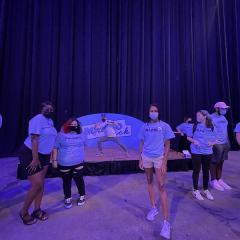 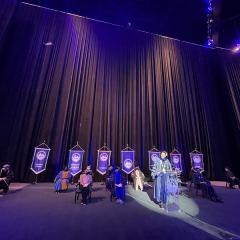 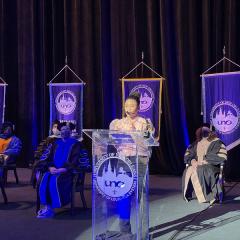 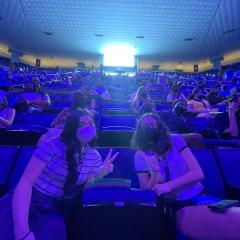 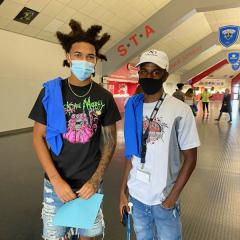 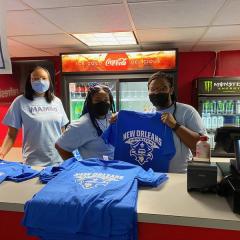 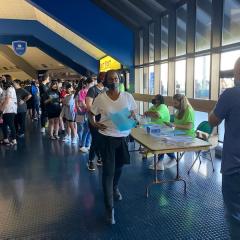 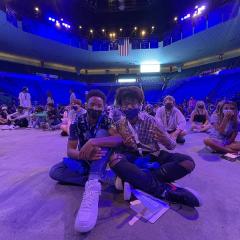 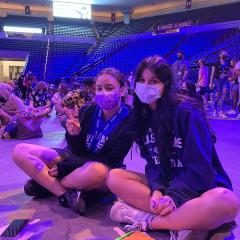 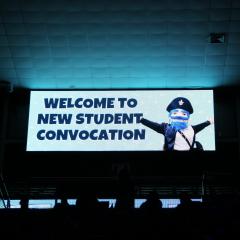 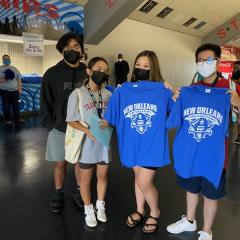