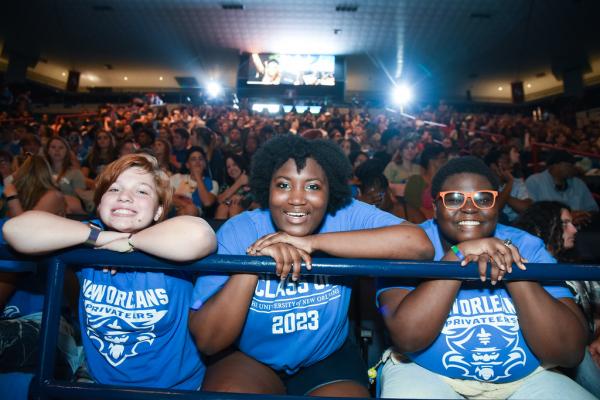 The Class of 2023 was welcomed to the University of New Orleans during a new student convocation held at Lakefront Arena.

While Wednesday marks the first day of class of the fall 2019 semester at the University of New Orleans, the Class of 2023 was officially welcomed to campus on Monday with a formal ceremony and a get-to-know-you party with their peers.

The annual convocation at the UNO Lakefront Arena, which included faculty marching into the arena in full academic regalia while “Pomp and Circumstance” played, commemorates the start of the academic journey for new students with an opening ceremony followed by free food and games.

President John Nicklow told the students that they should be proud of their academic accomplishments thus far, and that they have taken “a leap toward enrichment,” by enrolling at the University of New Orleans. However, he told them much work lies ahead.

“I hope you’re not satisfied,” Nicklow said. “I hope you take today to reflect and consider the importance of this time in your life. And then tomorrow, get to work and focus on the challenges that lie on the horizon.”

Nicklow told students that college is a “transformative experience,” but that they must be open to growing, learning and getting involved on campus.

It is in this same venue, Nicklow told the students, that they will don their own gown and mortarboards to conclude their undergraduate journey to a college degree.

“Until your commencement, let’s get to know each other better, and let’s work hard together to reach that day,” Nicklow said.

Carolyn Golz, associate vice president for student affairs and dean of students, told students that they were all on a “shared journey,” despite the diversity of places they come from and the varied experiences they bring with them.

“You might have different family traditions. You are majoring in different subjects,” Golz said. “And, yet, you all have at least one thing in common: You are new to the University of New Orleans. This place, this experience, is new to all of you.”

Golz told students to take time to be nice to each other, take a risk and speak to someone they don’t know.

“And, if someone smiles or says ‘hi’ to you, acknowledge that for the gift it is,” Golz said. “It takes courage to put yourself out there like that!”

She urged the students to keep a “growth mindset over a fixed one,” and to take advantage of the campus resources.

“Now is the time to step out of your comfort zone, to challenge yourself, and you could not have chosen a better school to do so,” Bourgeois said. “There will be leadership retreats, career workshops, internships, you name it. Up until your graduation, you will be equipped constantly with tools to help you succeed, so don't pass it up.”

Bourgeois concluded her remarks by inviting students to take part in their first chant as a Privateer.

As the students stood and chanted, twin cannons filled with confetti and streamers exploded and inflated, multicolored beach balls floated from the ceiling.

The festive ending carried over to the dinner and games that awaited students following the convocation.
With music pumping, students gathered around tables of food and game stations.

The trio said they enjoyed the spirit of convocation—the effort of getting new students together.

“I think it’s really sweet that they are all trying to introduce us to the new school and they are all very excited for us to be here,” Clements said.

Ricard said she also appreciated that the remarks prior to the party were short.

“I think this is really cute that they do this for us,” she said. “The speeches weren’t too long, and I think they considered how we feel and tried to make it easy for us.”

Said Williams: “It’s fun, I love it! You get to meet a lot of people.” 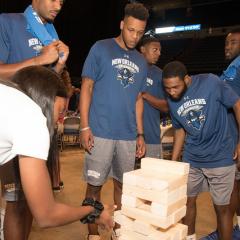 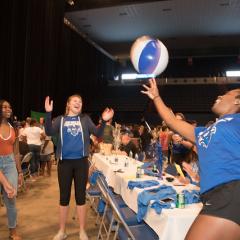 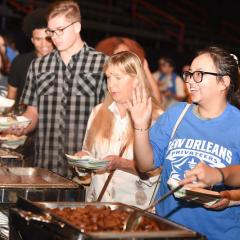 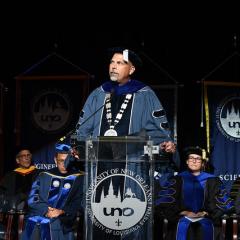 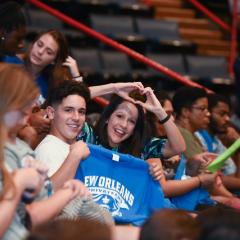 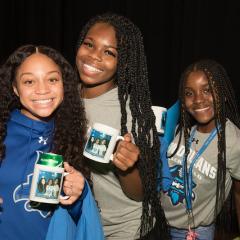 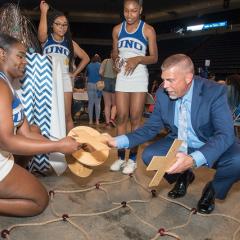 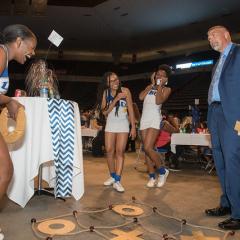