Rome, Italy’s capital, is a sprawling, cosmopolitan city with nearly 3,000 years of globally influential art, architecture and culture on display. Ancient ruins such as the Forum and the Colosseum evoke the power of the former Roman Empire. Vatican City, headquarters of the Roman Catholic Church, has St. Peter’s Basilica and the Vatican Museums, which house masterpieces such as Michelangelo’s Sistine Chapel frescoes. 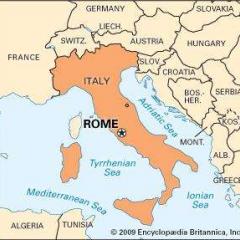 What's the history of Rome?

As legend has it, Rome was founded by Romulus and Remus, twin sons of Mars, the god of war. Left to drown in a basket on the Tiber by a king of nearby Alba Longa and rescued by a she-wolf, the twins lived to defeat that king and found their own city on the river’s banks in 753 B.C. After killing his brother, Romulus became the first king of Rome, which is named for him. A line of Sabine, Latin and Etruscan (earlier Italian civilizations) kings followed in a non-hereditary succession.

Rome’s era as a monarchy ended in 509 B.C. with the overthrow of its seventh king, Lucius Tarquinius Superbus, whom ancient historians portrayed as cruel and tyrannical, compared to his benevolent predecessors. A popular uprising was said to have arisen over the rape of a virtuous noblewoman, Lucretia, by the king’s son. Whatever the cause, Rome turned from a monarchy into a republic, a world derived from res publica, or “property of the people.”

There's no shortage on lists of where to eat, what to see, and what to do while in Rome, but here are a few links worth exploring:

Where to Eat in Rome: Eater

The Quest for the Best Gelato in Rome

7 Day Trips to Take from Rome